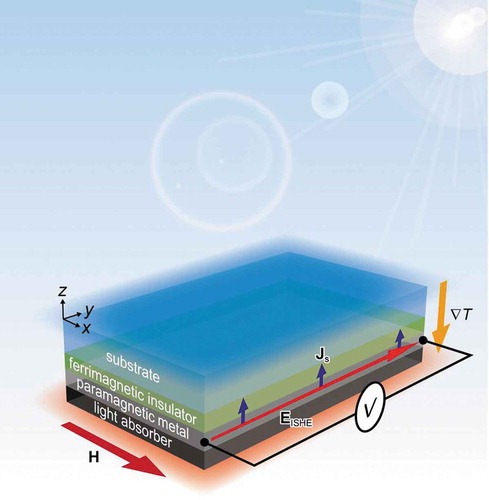 Spinning electricity from heat and cold

Thermal emission is radiated from the top of the device, keeping it cool, while sunlight is absorbed at the bottom, keeping that part warm. The temperature gradient and types of materials used lead to the generation of a spin current that is converted to thermoelectric voltage. Credit: Ken-ichi Uchida

A new device harvests two types of energy during the daytime, making it cool on one end and hot on the other, to generate electricity around the clock. With further improvements, the device could be used in off-grid Internet-of-things sensors. The details were published in the journal Science and Technology of Advanced Materials.

electron spins along a temperature gradient, called the spin Seebeck effect, and that increasing a device’s length perpendicular to the gradient boosts voltage. Scientists would like to fabricate more efficient, thin thermoelectric devices based on the spin Seebeck effect. However, the thinner the device, the more difficult it is to maintain a temperature gradient between its top and bottom.

Satoshi Ishii and Ken-ichi Uchida of Japan’s National Institute for Materials Science and colleagues have solved this problem by making a device with magnetic layers that continuously cools at the top and absorbs heat from the sun at the bottom. In this way, the device harvests two types of energy. Radiative cooling occurs at the top, as heat is lost from a material in the form of infrared radiation, while solar radiation is absorbed at the bottom.

“It is really important to take full advantage of renewable energy in order to achieve a more sustainable society,” explains Ishii. “Daytime radiative cooling and solar heating have both been used to improve a variety of thermoelectric applications. Our device uses both types of energy simultaneously to generate a thermoelectric voltage.”

Here’s how it works:

The device has four layers. The top layer is a weak paramagnet made of gadolinium gallium garnet. This layer is transparent to sunlight and emits thermal radiation to the universe, getting cooler. Sunlight passes through to the following ferrimagnetic layer made of yttrium iron garnet. This layer is also transparent, so light continues to travel down into the bottom two light-absorbing layers, made of paramagnetic platinum and blackbody paint. The bottom section stays warm due to sunlight absorption. The spin current is generated in the ferromagnetic layer owing to the temperature gradient between the top and bottom of the device and is converted to electric voltage in the paramagnetic platinum layer.

The device works best on clear days, as clouds reduce the achievable temperature gradient by blocking the emitted infrared radiation from passing through the atmosphere and reducing the solar heating.

GlobalConnect in agreement with Telenor

The outcome of the exercise of...