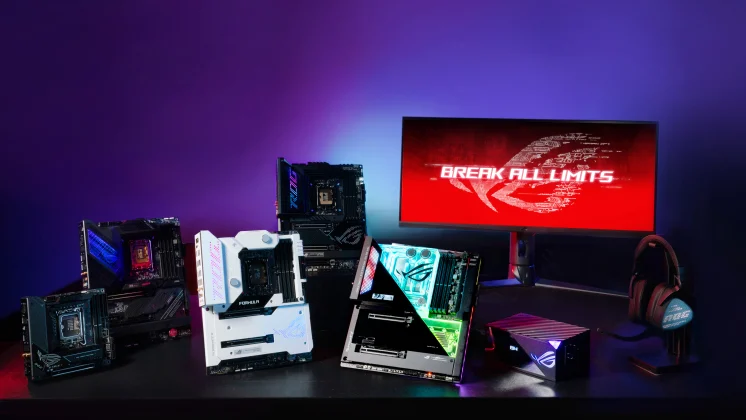 ROG aims to “Break All Limits” with cutting-edge performance and features as the new Z690 platform debuts for Intel 12th Gen Core CPUs with DDR5 and PCIe 5.0 support

ASUS Republic of Gamers (ROG) today announced a groundbreaking new generation of Intel®-based motherboards, power supplies, monitors and more during its Break All Limits event. For the first time, gamers can wield DDR5 memory modules and PCIe® 5.0 devices, plus Intel® Core™ CPUs that have been redesigned from the ground up to feature as many as 16 cores and 24 threads. To prepare for these historic new technologies, the ROG Maximus Z690 Extreme, Extreme Glacial, Apex and other Z690 ASUS motherboards come outfitted with cutting-edge power delivery that can react in split seconds to changes in voltage and frequencies introduced by the Intel Alder Lake platform, to keep these potent new processors operating at maximum power and efficiency.

Furthermore, Z690 ROG motherboards are armed with an exclusive new feature called ASUS Extended Memory Profiles (AEMP). With AEMP, a simple setting in the BIOS can boost DDR5 memory module clock speeds and timings beyond their official limits, to eke out every last ounce of performance.

To help enthusiasts feed their systems with all the clean and reliable power that modern PCs demand, the ROG Thor 1600W Titanium presents a new pinnacle of ROG PSU design.

For example, Titanium certification requires greater than 90% efficiency for loads ranging from 10% to 100%. The ROG Thor 1600W delivers on this lofty goal thanks in part to a digital control design infused with the painstakingly precise regulation required by a gaming PC or workstation, plus advanced solid-state gallium-nitride components. This ambitious combination leads to a heady 93.54% efficiency at 100% load.

ROG Thor PSUs are also designed to run fanlessly at up to 50% load. As this threshold is crossed, the 1600W, 1200W, and 1000W models leverage a new 135 mm fan built with the latest axial-tech design to circulate air through highly-swept blades, a compact fan hub and an outer barrier ring, generating whisper-quiet cooling at a given rotational speed. Meanwhile, large ROG heatsinks help chill discrete ICs and components with more mass and surface area than average, extending the life of those heat-sensitive parts.

This mission of excellence empowers all PSUs in the new ROG Thor family to achieve Lambda A++ certification — the most stringent noise performance standard defined by independent testing firm Cybenetics. To meet this lofty standard, PSUs must produce less than 15 dBA during the testing process. In doing so, the ROG Thor 1000W, 1200W, and 1600W secure an enviable position as the quietest PSUs of their type on the market.

The ROG Thor series isn’t just poised to provide ample and reliable power in large quantities today. ROG Thor PSUs get a 10-year warranty, and they also include a new 12-pin high-capacity auxiliary PCIe 5.0 connector for assured compatibility with components of the future.

For gamers seeking a sizeable and high-end wide-aspect monitor, ASUS introduces the ROG Strix XG309CM. At 29.5 inches with a 2560 x 1080 resolution, it features a 1 ms GTG response time and up to 200 Hz refresh bolstered by ASUS ELMB (Extreme Low Motion Blur) Sync. ELMB Sync enables the simultaneous use of ELMB and variable-refresh-rate technology for fluid and responsive gameplay. This Fast IPS unit can keep up with the twitchiest shooters around.

The ROG Strix XG309CM also offers a USB Type-C port, ideal for connecting to a laptop as a secondary display, and it allows the monitor to act as a USB hub for keyboards, mice, and other peripherals. Speaking of which, the ROG Strix XG309CM features an integrated KVM switch as well, so keyboards and mice can control two separate PCs that are plugged into this monitor, instead of having to physically swap input devices back and forth each time. Just flick the switch to toggle input control from one PC to another in a matter of seconds.

Add the integrated tripod on the display stand for mounting a webcam or microphone, and users have a monitor that’s well-suited for both work and play.

For gamers who prefer to stick to 1080p displays, ASUS offers the ROG Strix XG276Q finished in Space Grey, with a new gaming-inspired pattern on the backside of the monitor. This 27-inch Fast IPS model is capable of a 165 Hz refresh rate, 1 ms GTG response times, and is DisplayHDR 400 compliant. And like the ROG Strix XG309CM, the ROG Strix XG276Q features a tripod on the monitor stand that’s ideal for attaching a webcam or microphone, allowing gamers to create their own streaming setup.

New to this generation of the ROG Delta S headsets are customizable AniMe Matrix™ displays on the outside of each ear cup. These feature mini LEDs that can be programmed to show off style with custom lighting designs, unique animations and live audio visualizations. Plus, distinctive soundwave lighting effects can even flash to the sound of a person’s voice. Its industry-leading ESS 9281 Quad DAC™ with MQA support and 50 mm ASUS Essence drivers combine to deliver an impeccable sonic experience, and an ASUS AI Noise-Canceling Microphone offers crystal-clear in-game voice communication. It also features a comfortable and lightweight design with ergonomic, fast-cooling D-shaped ear cushions for a perfect fit. And instead of a 3.5 mm audio cable, the ROG Delta S Animate features USB-C ® and USB-A connectors for compatibility with PCs, Macs, PlayStation®, Nintendo Switch™ and mobile devices.

Removing your graphics card can be tricky business when access to the PCIE-slot is limited. The PCIe Slot Q-Release makes graphics card removal easier. Just hit the button on the right side and the graphics cards will be automatically released!

While black goes with everything, some may want a different aesthetic for their elite motherboard. Enter the ROG Maximus Z690 Formula with its Moonlight White colorway (which has also recently arrived for select ROG laptops, keyboards, headphones and mice). Featuring an eye-pleasing blend of white, light gray, and brushed metal, the Formula can brighten up any gamer space with a touch of refinement. 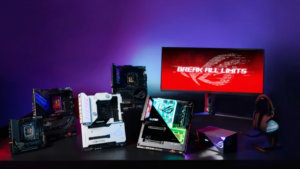 And the ROG Maximus Z690 Formula has the power to match, thanks in part to the CrossChill EK III heatsink designed in collaboration with EK to help users break the barriers of voltage regulator performance while keeping thermals in check. The CrossChill EK III has built-in liquid cooling outlets and inlets that users can incorporate into a custom loop to chill the Formula’s VRMs. And with teamed 20+1 power stages rated for up to 105 amps, the ROG Maximus Z690 Formula has the premium power delivery that ROG is famous for.

There’s also plenty of high-end connectivity to go around, with WiFi 6E, Intel 2.5 Gb Ethernet, and two Thunderbolt 4 USB Type-C ports that can drive two external 4K displays and many other compatible accessories. Users also get HDMI 2.1 and five USB 3.2 Type-A ports built in, and ASUS has engineered a ROG Strix Front Panel SATA Card that adds four SATA ports, front-panel headers, a speaker header, and one addressable RGB Gen 2 header that can connect to the rest of a user’s Aura Sync setup, in addition to the RGB and ARGB headers already built into the motherboard.

Will the rise of gaming cryptocurrencies lead to more IP theft?

Internet Vikings launches into the U.S. with bespoke iGaming hosting in West...

Open banking: opening the door to...